The Rabbit of Hope By “Miss Potter”

You know now how these things work. It is nighttime, you cannot sleep and you are switching channels on the TV. “Banal” is what you’re going to say, “cliché” is what i am going to say – we’re not going to spoil it there – the time i am elegantly talking to myself trying to forget the reasons that drove me to mirthless scan a box with throbbing images within the night. It was as if I was exploring a newly brought virus from outer space. Anyway my temporary insomnia isn’t as important as the fact that my eye got caught on a movie that, from what i understood later on, had just started. It’s that feeling where you think that the view is disconnected from the brain and everything is working mechanically. I will not deny you, it was like that but a drawn rabbit moving with grace associatively brought Alice in my thought. Oh! that Alice, my loved fairytale of my childhood, not to mention even now,  but I don’t want you to have strange ideas for me in you. So that rabbit “did” something to me, it halted me from the mechanical drunkenness of my fingers playing nervously something like zumba in a familiar dancing tempo on the little box. It is called a remote, it hard for you to find out what I mean. The movie ended and left me with a bit of sweetness in my mouth. Others who have knowledge of television judgment will describe to you with greatness and complicated words what the director wants to say. I judge movies from the taste they leave in my mouth. So I sat down and search about the subject, the  rabbit. You were expecting me to tell you the movie,  no, tell me the truth. The rabbit “clicked” to me, so I wanted to find its story and its creator’s as well. And I did. It was an endless night and I stayed up so why not find out? For mis Beatrix Potter the reason why she came through this life, leaving behind her beautiful pictures and stories that still worm kid’s souls.

So the rabbit that miss Beatrix Potter created, she named it Peter Rabbit, affected by her childhood rabbit Peter Piper. It is wearing a nicely done blue jacket and a beautiful pair of brogues. He has an entire family behind him, lives in a rabbit hole equipped with a kitchen you would envy and it even has all the comforts of a human home. The first story of this beautiful rabbit “The story of Peter Rabbit” occurred in 1893, when Beatrix sent her drawings and the fairytale in a letter, to Noel Moore, a five-year old boy of a family related to her, which was ill, so that it could get over its illness easier and have fun with the rabbit’s adventures. In June 1902, the publishers Frederick Warne & Co took over the publication of her first book and up until the end of the year more than 28.000 copies were sold out. As years went by, the Story of Peter Rabbit sold over 40 million books worldwide, while up until 2008, all of the rabbit’s stories went over 151 million copies in 35 languages.

I will also tell you though, a few words about its creator, Beatrix Potter, a glamorous personality. She was born in July 28th, 1866 in London and was a daughter of a quite wealthy family. Writer, illustrator, physicist and ecologist. Contrary to her other brothers and sisters, she is being raised isolated with her nanny and the servants in a particularly strict and conservative environment. In this choking atmosphere, her only company is her numerous pets that she gathers around her, which she takes care of and provides with love and care. She has managed to gather frogs, rabbits, salamanders and skunks, she even took care of a “pet” bat. The special relationship that she evolves with her two rabbits inspired her later on to write and illustrate her most successful story.

She spends her summers with her parents in Scotland, near Lake District, where – without any previous training – she observes, illustrates and paints everything that provokes her interest. Nature’s beauty and her animals are the ones that monopolize her interest,  excite her imagination while she is painting ceaselessly. Her painting is masterful and proves how much imagination, pure thinking and free spirit finally hides inside her despite any adversities. Beatrix differentiates totally and decides to walk her own paths as she faces her parents will. Although at that time it wasn’t that easy for women to receive the education they desired, Beatrix easily managed to penetrate the male scientific abaton, the one of mycology, since she managed to perform exceptionally and present to it’s members some analytic aquarelle of fungi. As we mentioned above, Beatrix sent Noelle her story, accompanying it with these words:

“Dear Noelle, I don’t know what to write you, so I am telling you a story about four little rabbits…”.

Something like that “Peter Rabbit”  was born, whose edition took shape 8 years later. That happened because in all the publishers Beatrix had attended to, they denied to publish it and only Frederick Warne accepted the challenge. That is when she met Norman’s son where they developed a tender love relationship between them and the got unofficially engaged due to fer family’s denial. Unfortunately Norman dies shortly before their wedding, leaving Beatrix alone, sad and away from her family. The strength of her soul but also her independent spirit make her go on with her life despite all the sadness she feels and her loneliness. She starts to write and illustrate ceaselessly and to publish beautiful kid’s books. She becomes financially independent and with the incomes of her sales she buys a big farm, Hill Top, in Lake District, where she gets married on her 40 years of age a local judge. The huge areas that she buys around the lake are increasing and soon she builds a farm of her own, in which she can now attend undistracted now with her great love, the animals. She keeps the farm’s personnel and starts dealing with cultivating the land while she continues to write children’s books, starring her favorite animals. 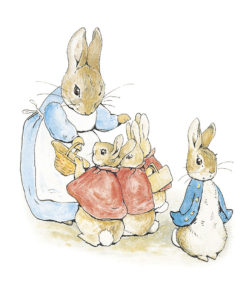 On December 22nd 1943, having published 23 wonderful books, Beatrix Potter dies, leaving behind her a huge work of literature. Her books are still being sold and translated in every language even today, in every part of the world.

Eventually, even nights seem to be hiding small surprises sometimes. Right where you think that a temporary difficulty has made you loose your sleep one night, unexpectedly comes a true story to remind you that the power of will and soul can destroy even the most unbearable obstacles as long as you can dream and “illustrate”…the next goal.