Will art save our fairy tailes?

Once upon a time, in that small, forever-green village of the sweetest nostalgia, there lived a special person. His thin white hair was like snowflakes embracing you in the warmth of the winter scenery, and his blue eyes were like the oceans that we travers with the boat of our dreams. But the clock was showing 12 and he had to go. ‘Don’t weep for me’, he pleaded ; unfortunately, I couldn’t keep my promise. Now, I am telling him a fairytale, like those accompanying my childhood evenings with the hope that he may be listening from up there. Are you listening, I wonder ?

I’ll tell you a story, that may not be true but if you think about it, life is a thin line between dream and reality, our everyday world being a fragile state of horrendous dragons and guardian angels. “Once upon a time” may be appreciated if we come to understand that there is only one ‘time’ and it belongs to us exclusively.

Therefore I’ll take you way back to a small kingdom, lost in the green valleys of a festive nature, where a special woman, named Love, ruled. Love had chosen for her spouse the Sun, a man as bright as the days that we succumb to the magic of our dreams. Love and Sun offered shelter to all the persecuted of that world and created a small community in which the unconditional acceptance of difference dominated.

You had to walk through these special grounds to conceive the powet of its energy and to feel deeply in your soul that a warm embrace dissolves the mist of suffering. Inside the kingdom of Love and Sun, rain and gloominess never showed their faces, and people, independent of color, race and ethnicity, were holding each other’s hands tightly and floating into a universe that offers wings only for the delicate travellers.

But , you may already know this better than me, happiness doesn’t last forever and, sometimes, truth is tested to prove that it is powerful enough to balance on the tight rope of fluctuating luck.

A fateful night, as the story goes, in the kingdom appeared a mysterious woman, Envy, with her black long cape and eyes as dark as the deepest wells of our untold fears. The woman carried in her bosom a young frightened boy by the name of Racism.

Time passed, the boy was growing up and Envy, a lonely creature that allowed the nightmares on her path to scar her once innocent face of hopes, felt, day by day, carried away by the emptiness of her soul. There were mornings that she hastily looked out the window and saw the happy faces of her fellow villagers. She really despised them. Most of all, she despised Love, the queen of all, the just leader of a place that looked as if it were bathed in the waters of eternal happiness. Her only comfort was her boy, Racism, a vulnerable and insecure child, whose minor handicap deprived him of his proud gait.

The grim day that Racism went to school arrived. His mom meticulously prepared him, took him by the hand and together they went up the hill that led to the luminous academy ‘Knowledge’. At the door of the academy, there stood a dignified middle-aged lady, with a classy appearance, wavy black hair, and green penetrating eyes. She heartily stretched her hand to Envy and with a clear and resolute voice said : ‘My lady I’m so glad you have entrusted me with the intellectual development of your son. My name is Education and I will stand by all these marvelous boys and girls in all their school years.’ Envy gave a pretentious smile to the benevolent tutor while she was thinking how much better it would be if she and her boy were granted a bag full of golden coins instead of a bag of useless knowledge.

It would have been yet another mundane day in the kingdom if a little girl called Frivolousness had not hastened to notice the insecure gait of Racism and bluntly utter: ‘That boy is lame. I’ll bring him my grandfather’s cane so he may manage to walk straight, the poor thing’.

“A moment is enough to change the route of destiny; a bunch of words veers the wheel of fortune and threatens to shutter to pieces the legendary motto ‘and they lived happily ever after'”.

Racism rolled inside his mom’s dress, and Envy who- I have forgotten to mention – had inherited her dark forces from her underworld grandmother, pulled an immense stick out of her sack and raised it to the sky shouting: ‘This place will never see light again. Love and Sun will awaken in chains inside a dark cave of terror and a gigantic dog named Fear will guard the cave. As for you fair Education, you’ll now turn into a marble statue. The spell will be broken only if dream touches reality”. With that puzzling phrase, Envy obliterated the laughter from the villagers’ faces and immersed the kingdom into a gray sorrow. Light never surged out in the once enchanting little world, the flora turned into a barren scenery and open- mindness was encaged in the dungeon of suspiciousness.

Years went by and the previously scared little boy became an adult with a heart of stone, a man that hesitated to face the wounds of his soul and decided to cover them with the heavy blanket of cruelty. Racism followed his old mother in the administration of the only school that there now existed in the once bright kingdom

and gradually started to nestle the seeds of doubt and discord in the innocent, young consciences. At his side, his fiancee, ‘Memorization’, a lean woman with shrunken and constantly crooked lips and a grave ,slightly judgmental look, who often pounded her hand at the table repeating the same sentence again and again.

” I don’t want you to understand what you read; I demand, however, that you memorize it word for word.”

So the children were suffocating under the burden of a daily oppressive schedule while Love and Sun, chained in the cave and guarded by Fear, were unable to bring the flowers back to the garden of present time.

One day, though, old Envy became seriously ill and her son, who always had an obsessive love for her, to tell you the truth, decided to leave his business for a while and devote himself to her care. ‘Memorization’, looking for the perfect chance to escape, even temporarily, from a disgusting job, announced to him with a hypocritical look of concern that she desired to be at his side.

So they went on conducting a series of interviews with the purpose of finding their temporary substitute.

One afternoon an ethereal, attractive woman appeared in front of them, with curly, blond hair and blue dazzling eyes. She captured their attention right from the start , so they trusted her with their duties without hesitation.

The woman’s name was Art and when she entered the grey, oppresive hall, for the first time, she faced the frightened little faces that struggled to swallow, like a pill, the lines from their gigantic books : Alienated from each other, locked into their own little world, built with the foundation of doubt and self-compromise.

The fair tutor looked at them sweetly and asked them to let go of their school books and follow her outside, into the barren nature where she told them a story about knights imprisoned behind the walls they themselves built and about queens entrapped into the stereotypes they named reality. Then she asked them to act out the story, to play the leading roles and feel the agony of the up -to-then unknown characters.

Then, something magical happened. For the first time after so many years, light flooded the place, Education abandoned her sculptured body, flora embraced the scenery and Love and Sun found the courage to unshackle the chains of slavery, look Fear straight in the eyes and prove to themselves that the gargantuan dog always assumes the power that we offer it.

Old Envy immediately felt that the spell was broken and shut her sorrowful eyes once and for all, Racism and Memorization went blind from the light of the world and the kingdom was filled with gay tunes and colorful balloons.

If education is moulding characters, if art can save us from the burden of our mortality, then why can’t they walk hand in hand into the evergreen world of a dream that meets reality? 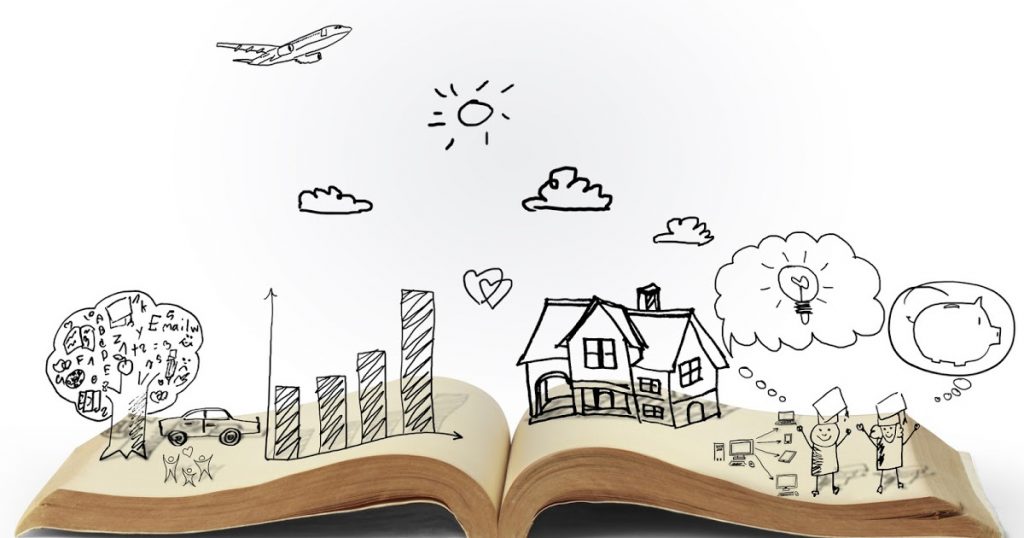